Fixing that bunion problem can be a snip - if done early

Fixing that bunion problem can be a snip - if done early

In minimally invasive method, incisions are made near the big toe to let bone-cutting instruments do their work

Running is a fitness activity that many do easily, but it took willpower for 27-year-old therapist Koh Wei Qi to take each step.

The avid runner, who pounds the pavement three times a week, would be left wincing in pain because of a bunion on her right foot.

A bunion is a bony lump that forms on the joint at the base of the big toe. It happens when the big toe is angled towards the second toe, creating the bony bulge.

Bunions run in families, though tight-fitting shoes or high heels may exacerbate the problem.

The bunion on Ms Koh's foot started growing when she was in her late teens, but it did not bother her much at the start. The discomfort started about four years ago.

"I realised I couldn't fit into the flats that I usually wear. I had to look for shoes with a wider toe box," she said. "I felt a slight discomfort in my right foot, where the bunion is more apparent."

The pain came on about two years ago, and early last year, she started to take painkillers so she could keep running. "My bunion was rubbing against my footwear, causing the pain," she said. "I wasn't keen to use painkillers in the long term as it is a hassle."

Pain - often agonising and can be relieved only with painkillers - is the reason people with bunions opt for surgery to correct them.

The surgery Ms Koh underwent is a relatively new method that may become more popular as people begin to realise there is something they can do to remove the pain that involves less scarring than in previous procedures.

Over the past five years, doctors at Singapore General Hospital have seen an estimated 15 per cent increase in patients with "hallux valgus" or bunions, said Dr Kevin Koo, a consultant at the hospital's department of orthopaedics surgery.

This comes as people are more aware that there is something they can do about it.

"We are still seeing the tip of the iceberg because there are a lot of people with bunions who do not seek treatment," he said.

Bunions will naturally progress, and can get to the point where the second toe overlaps the main toe, he said.

"It can affect patients to the point where they have pain while wearing covered shoes, or their gait is affected because of the pain of walking," added Dr Koo.

Dr Tan Ken Jin, an orthopaedic surgeon at Mount Elizabeth Novena Hospital, said he is beginning to see more people who want to correct their bunions because they cannot fit into winter shoes when they are overseas.

"For bad cases, the bunion remains painful and red and inflamed all the time and this can make wearing a closed shoe unbearable."

Dr Tan advised people to consider surgery when the pain from the bunion gets more frequent and more severe, and when it affects the neighbouring toes.

"As the bunion deformity gets worse, the second and sometimes the third toes begin to get affected.

"The second and third toes may form a hammer toe deformity. This can lead to pain under the ball of the foot, which is different from bunion pain on the inner side of the big toe."

Dr Tan said the pain under the ball of the foot can feel like walking with a stone in your shoe all the time, and is very uncomfortable.

He had an elderly patient whose bunions worsened over the years, causing her toes to overlap. Her second toe pointed upwards and she could not fit into any footwear without pain.

"She wasn't aware of bunion correction surgery and actually came and asked me to amputate her second toe!" said Dr Tan, who eventually corrected her bunion and second toe with surgery.

Nevertheless, while bunions will progress, not everyone will get a severe case, said Dr Mark Chong, a consultant in the foot and ankle surgery division of the orthopaedic surgery department at National University Hospital.

"We only operate on the bunions when there is pain," he said.

Patients should seek help if there is obvious pain, said Dr Koo, as minimally invasive surgery can be done only for mild to moderately painful bunions. By the time the bunions become severe, only open surgery can fix it, he said.

In the minimally invasive method, tiny incisions are made near the big toe so that bone-cutting instruments can be inserted to correct the deformity. In open surgery, the surgeon will make cuts in the bone and realign it.

Still new in Asia, minimally invasive bunion surgery has been carried out in Europe for more than five years, said Dr Koo, who was trained in London and started offering the procedure in Singapore in mid-2014. He has done more than 60 such procedures since then.

"The patient is admitted for one night and they can walk immediately after the surgery but they have to use a pair of post-surgery slippers for six weeks to protect the feet," said Dr Koo.

"In open surgery, the recovery time is similar but the risk of wound complications is higher such as infections and keloid formation." The recovery time for both types of surgery is about four to six weeks.

The cost of open and minimally invasive bunion surgery is about the same, noted Dr Koo.

"The out-of-pocket expenses for subsidised patients can range from $350 to $1,000, depending on whether they're doing one foot or both feet."

Dr Koo said he conducted a two-year study recently that showed the new technique offers as good a correction as the open method for the same kind of bunion. There is also less post-operative pain complications, he said.

However, as the minimally invasive method is quite new, there is a lack of long-term data on whether the bunion may recur as much as it could with traditional surgery.

Traditional open surgery is "time tested and would be regarded as good reliable treatment", said Dr Tan. "However, the surgical incision is much larger and so tends to be associated with more post-operative pain and a longer time for wound healing.

" I have found the minimally invasive technique to be associated with less pain and wound healing issues... However, it is more technically demanding."

Surgery is the only way to get rid of bunions, but there are things you can do to ease the pain they cause.

For mild cases, a short course of anti-inflammatory medication will help relieve the acute pain caused by inflamed bunions.

Go for a pair of shoes with a wide toe box. And if you want to wear high heels, make sure they are, for instance, one-inch heels. Another option is to wear them less often.

Bunion pads are placed over the bunion area, thus preventing the bony protrusion from rubbing against the side of a shoe.

They are good for temporary pain relief as they cushion the pressure point, said Dr Kevin Koo, a consultant at Singapore General Hospital's department of orthopaedics surgery.

However, these pads and insoles will not improve the appearance of the foot.

These help to hold the main toe straight, and ease any discomfort caused by the bunion.

Said Dr Koo: "The moment you remove them, the toe will deviate back to the original position.

"They do not slow down or stop the natural progression of the bunions. The only thing they do is improve the look of the forefoot cosmetically."

Our orthopaedic specialist is widely recognised in his field to skilfully diagnose & treat your injury or condition so you can emerge stronger and safely return to the activities you enjoy.

For more information, please call 9898 7781 or click here to send us an email 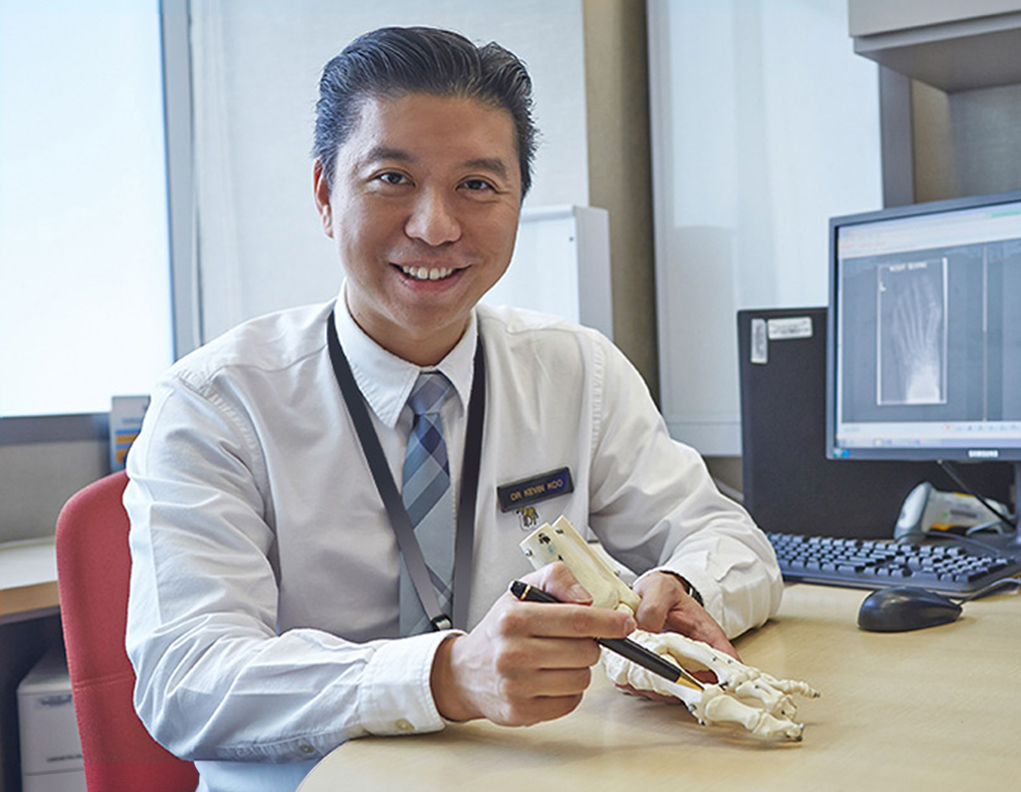 Dr Kevin Koo Oon Thien
Director and Consultant Orthopaedic Surgeon
MBBS (S’pore), DFD (CAW),
MRCS (Edin), MMed (Ortho),
FRCSEd (Orth), FAMS
Dr Kevin Koo is a fellowship-trained Consultant Orthopaedic Surgeon and previous Director of Foot and Ankle Service at the Singapore General Hospital with more than 15 years of experience.
READ MORE
At The Bone & Joint Centre, there is nothing more important than the health and well-being of our patients.

We want to assure you that we remain committed to providing the high quality and compassionate care you have come to expect from us. For more assistance, please call us at 9898 7781 or fill up the form below and we will get back to you as soon as possible.